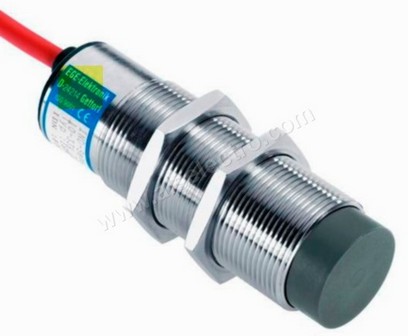 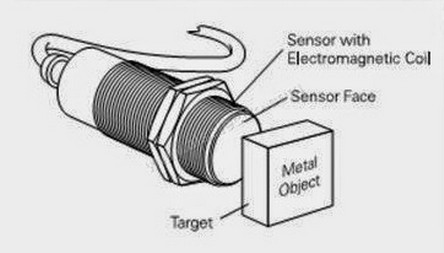 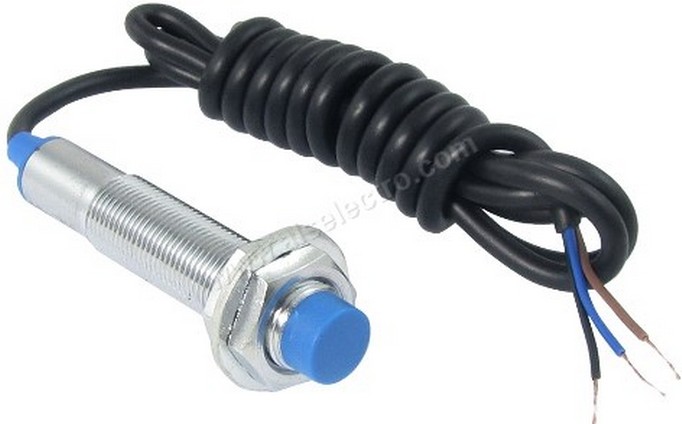 This metal sensor is INDUCTIVE sensor , which means that it induces current when metal is near to it.
This sensor is a non-contact electronic sensor that is used detect positions of a metal objects.
The sensing sensing range depend on the type of metal being detected. Ferrous Metal, such as iron and steel, allow for a longer sensing range, while nonferrous metal objects such as aluminum, copper, can reduce the sensing range by 60 percent. Since the output of an induction sensor has two possible states, an inductive sensor sometimes referred to as an inductive proximity switch.
This sensor consist an induction loop, electric current generates a magnetic field, which collapses generating a current that falls toward zero from its initial trans when the input electricity stops.
The inductance of the loop changes according to the material inside it and since metals are much more effective conductors that other materials the presence of metal increases the current flowing through the loop. This change can be detected by sensing circuitry which signal pass true to some other device whenever metal is detected.
This device is commonly used in traffic lights, car washes, manufacturing machinery, automated industrial machinery, elevators and building automatons this device is mostly used because can adopt in a rugged and dirt environment.

The metal proximity sensor has three wires. The blue should be in the ground, brown is on +VCC which should be giving to Arduino + 5v VCC and when you take metal near to the sensor it induces more current which results in higher voltage. In this case you need to open your serial monitor to see the incoming signal from the analog pin then make a threshold to determine if metal is detected or not.
Generally speaking the Iron/Copper or Metal with good magnetic properties will induce more that 1v when brought nearer to the sensor you need to touch the surface it will start detecting from a distance about 3CM.
/*
Arduino code
Metal Detection with 3 wire sensor
*/

The sensor incorporates an electromagnetic coil which is used to detect the presence of a conductive metal object. The sensor  ignores the presence of an object if it is not metal.
Inductive proximity sensors are operated using an Eddy Current Killed Oscillator (ECKO) principle. This type of sensor consists of four elements: coil, oscillator, trigger circuit, and an output.
The oscillator is an inductive capacitive tuned circuit that creates a radio frequency. The electromagnetic field produced by the oscillator is emitted from the coil away from the
face of the sensor. The circuit has just enough feedback from the field to keep the oscillator going. 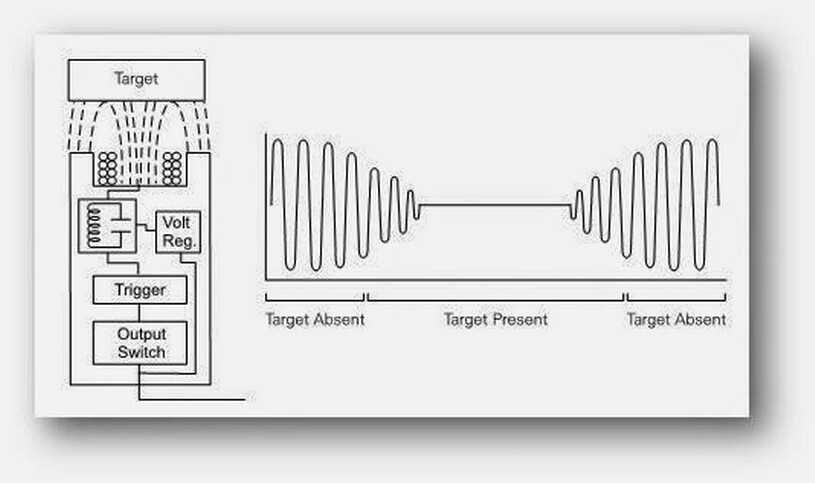 Output Configurations
Three-wire, DC proximity sensor can either be PNP (sourcing) or NPN (sinking). This refers to the type of transistor used in the output switching of the transistor.

The following drawing illustrates the output stage of a PNP sensor.
The load is connected between the output (A) and the negative side of the power supply (L-).
A PNP transistor switches the load to the positive side of the power supply (L+). When the transistor switches on, a complete path of current flow exists from L- through the load to L+.
This is also referred to as current sourcing since in this configuration conventional current is (+ to -) sourced to the load.
This terminology is often confusing to new users of sensors since electron current flow (-to +) is from the load into the sensor when the PNP transistor turns on.

The following drawing illustrates the output of an NPN sensor. The load is connected between the output (A) and the positive side of the power supply (L+). An NPN transistor switches the load to the negative side of the power supply (L-). This is also referred to as current sinking since the direction of conventional current is into the sensor when the transistor turns on. Again, the flow of electron current is in the opposite direction.